The Temponauts
The Temponauts are the real deal…They play an excellent guitar pop, mixing equal parts of Paisley Underground’s most melodic ingredients (think The Three O’Clock), the slightlydelic twang of The Stone Roses and The Bluetones, along with the legacy of the Byrds… 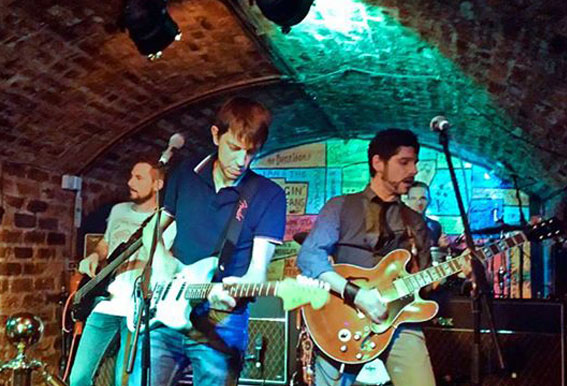 Would’ve easily found their way up to the toppermost of the poppermost, had they only released their album sometime during the first half of the ‘90s. Mixing equal parts of Paisley Underground’s most melodic ingredients (think The Three O’Clock), the slightlydelic twang of The Stone Roses and The Bluetones, along with the legacy of the Byrds…Shindig Magazine.
The debut album by Piacenza’s finest. This disc will come as a very pleasant surprise to those into the jingle-jangle sound of The Byrds, melodic powerpop, neo-psychedelia and the Paisley Underground. And some of you will probably discover echoes of 90’s Britpop as well. All in all a mighty enjoyable album by a talented Italian band… Stoned Cicus

The vocals are sweet and other worldly ..sounding as if they came from another planet! One can not help but think of the first STONE ROSES album when listening to this. The spirit of the STONE ROSES is in this music. All you BYRDS fans will enjoy the sound of the electric 12 string. This is a wonderful cd and will convert many a new fan to their sublime sound. THE TEMPONAUTS combine the best bits of 60’s rock and merge it with today’s indie pop rock sounds. Check this one out! It’s truly an original sound and a delight to these ears! GRADE A